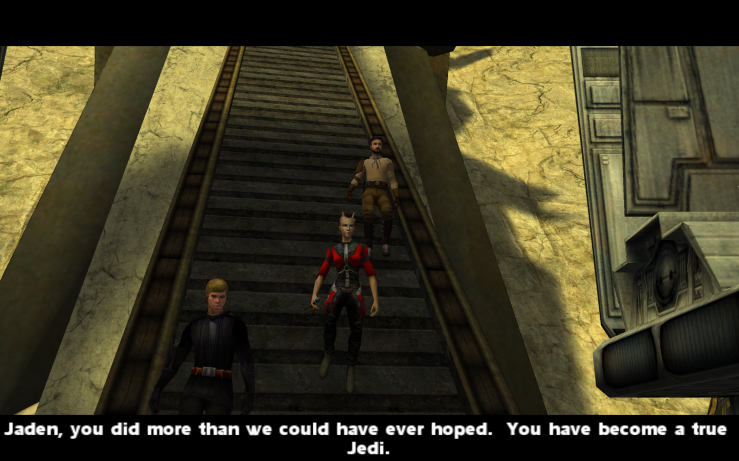 This is a empty game.

Jedi are not warriors, but this Jedi leaves miles of corpses behind her after every mission. Corpses that vanish as soon as she leaves the room.

The force is not a toy. It requires spiritual concentration and training, even for those who use maliciously. But this force will heal you at will, repel all enemy force powers, and shield you from death.

Anger leads to the dark side, but that’s all this game encourages is anger. A propulsive, furious anger that stalks from level to level. There is no action that is not violent. Exploration is only a way of licking wounds.

It constantly refers to Star Wars, but is unable to bring it to life. The surface is there. The hum of lightsabers, the klang of blasters, John William’s leit motifs, monsters, and aliens. It thinks that simply referencing these things will invoke their presence. The soundtrack drones the same Williams’ tracks on an endless loop, begging for the thrill to stay. The missions bring back Hoth and Tatooine, without any of the mysticism or the lived-in grime of the films. There aren’t even civilians in any of these places. Life is nowhere to be found. Nostalgia hampers even the game’s violence. Academy’s insistence on keeping to its Doom-inspired roots betrays its third person fighting aspirations. It floods itself with guns you barely use, except against lightsaber proof enemies with huge health bars. This is bad, boring design. Worse, the game knows it. It just can’t let go of itself or its history.

The true interests of the game unveil themselves in the final third: The artful ballet of fighting other Jedi. However, there is no clear combative language and little exchange. The most effective way to fight is to furiously click at enemies. Whether your blow lands seems to rely on luck as much as anything else.

The game is not without its moments of grace. There is a thrill in fighting an opponent equal in power and in the game’s emphasis on movement and positioning (no matter how stilted the movement.) One memorable level confronts the game’s identity crisis head on and takes away your lightsaber, re-contextualizing the game’s spaces in a way that emphasizes their strengths.

But the game cannot outrun its own hollow heart. The player is no mystic knight errant or hero, but rather a killer for hire. You only rob the game’s spaces of life and by the end only emptiness is left. The soul of its source material has disappeared, just like the corpses you left behind.