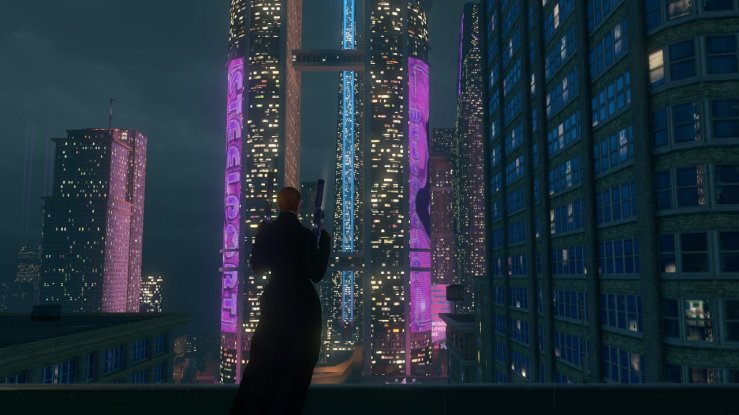 Saint’s Row: The Third is naked power fantasy. It is a Grand Theft Auto clone, set in the fictional city of Steelport (think Pittsburg). The whole game centers around conquering an entire city, removing other gangs, police, and even the military to replace them with your blatant commercialization. These entities are not your enemy because they are bad, but because they are in your way. All of the game’s activities bring you money or fame, which in turn allows you to become even more powerful and omnipresent. The enemy is never safe from you. You invade online spaces, homes, and bases to root out any inch of resistance. Saint’s Row is naked power fantasy, but what a smart, wonderful game.

What sets Saint’s Row apart is its thorough and obvert sense of self-awareness. The developers, Volition, knows that people play open world games like this to cut loose from their normal inhibitions and everything in the game facilities that. The game knows that its players will use its city as a playground and so the city is a playground. Most of the missions and activities are extensions of things the player already wants to do. You want to have infinite RPG ammo and destroy everything in sight? Go for it. You want to do the same thing in a tank or a helicopter? Have fun. You want to drive on the sidewalks? You want to wreck cars? Cheers. 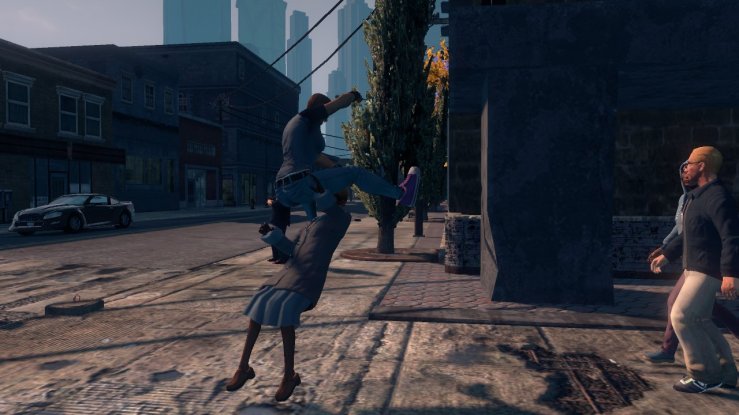 Even the more basic open world mechanics facilitate player agency. For example, as you attack gangs and p0lice, a notoriety meter increases. The higher your notoriety, the heaver the firepower enemies will send at you. The hook here is that there are two meters, one for the gangs, the other for the police. This makes a great deal of chaos easily attainable. You can get one or both meters to maximum quickly, which results in absolute insanity. Also, all notoriety can be put to zero simply by entering a building you own. Considering the game allows you to buy up all of Steelport’s real estate, this is remarkably easy. The player has an exacting control over what kind of chaos they want and how long they want it to last. This kind of flexibility extends to the rest of the game. Upgrades are plentiful and varied, allowing the player to carry more ammo of a certain weapon type, increase the amount of health they have or the rate at which it regenerates, or call in team mates of every stripe to help out. The game also has an extremely deep and thorough character customization system. The number of varied clothing options is simply astounding. Furthermore, plastic surgery stations are placed around the world, allowing you to change your gender and appearance at any time. The main missions offer choices, but they emphasize preference rather than morals. Do you want more fame or more money? Do you want a cool mask or a powerful combat move? Do you want zombie friends or help from Burt Reynolds the mayor? There are few rights or wrongs in Saint’s Row. This emphasis on player choice gives the fantasy its empowerment and layers every inch of the game with its purpose.

Saint’s Row sells all this tonally. Volition knows that the gameplay is inherently silly, so they make the tone just as ridiculous. The opening level has you skydiving while shooting at helicopters. In another, you destroy an entire aircraft carrier. In a series of missions, the player learns courage by riding a car with a bengal tiger. The game starts ridiculous and only gets more and more silly. 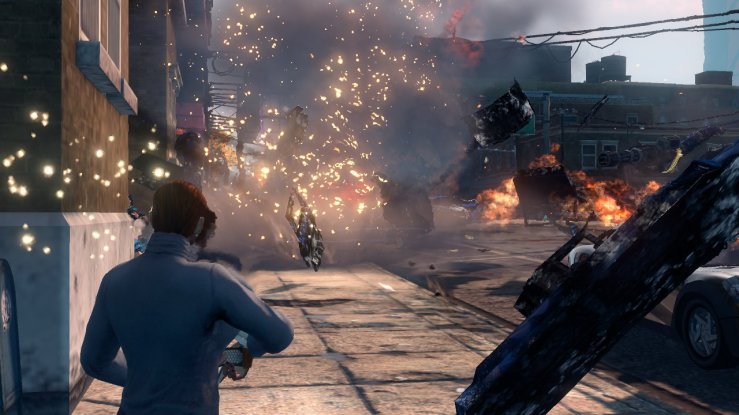 All this results in a game that feels surprisingly good-natured. The camaraderie between the different characters cements this tone. The player character has friends, with in-jokes, who have shared both good and bad times. The dialog is sharp, warm, and silly in equal measure. Playing a mission is like hanging with friends. While Saint’s Row’s humor plays with the same satire that defines Grand Theft Auto, it never feels mean spirited. Rather the game is a celebration of everything it touches. It has affection for the things it references and lampoons. Even the violence, which is constant, is too extreme and silly to be taken seriously. The game constantly winks at you and says, “Isn’t this fun? Aren’t you having a good time?”

What makes this so remarkable is that so few games are able to design holistically like Saint’s Row. Many games attempt to layer moral, political, or thematic complexity onto a existing framework, without thinking about what that framework actually says. Bioshock: Infinite, for example, uses a shooter with magical powers to try and comment on the soul of America. It addresses class, racism, sexism, gender roles, and much more. However, it fails, because it attempts to use a typical shooter structure, power fantasy and all, without thinking about how the mechanics frame the world. As another example, the Assassin’s Creed series is often unable to design missions that facilitate the purpose of play, resulting in games that often feel scattershot and tonally distant. In contrast, every decision Saint’s Row makes feeds into this goal of empowered, breezy fun.

Saint’s Row: The Third’s lack of self-seriousness and affectionate embrace of its silliness makes for a game that is mature and aware in surprising ways. It is a rare open world game that feels so focused and toned. It is not polished or shiny, but it has a beating heart. That is more than many similar games can claim.