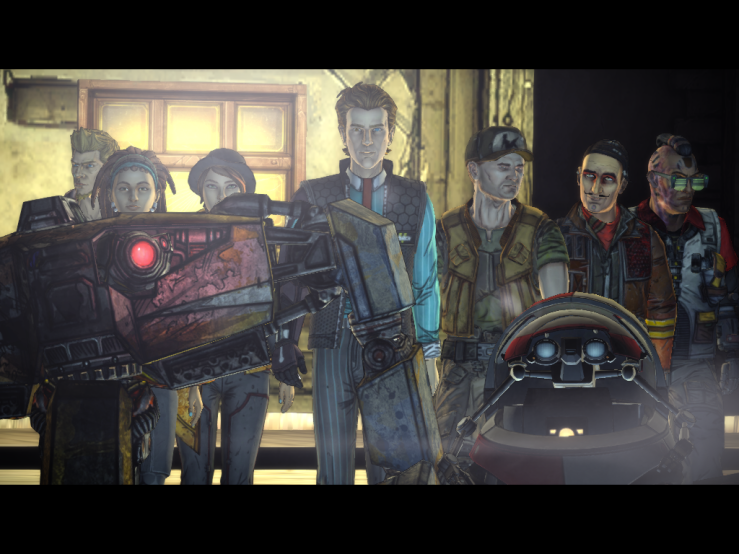 Tales from the Borderlands is one of the most holistically designed games I have played. Its humor, style, decision-making, and pacing lead to an experience that is at once thematically complex, hilarious, endearing, and heart warming. These disparate elements feed into each other and create a game that feels whole as well as assured and confident. Many games are so eager to please that they lose the center of their engagement and end up meandering in between ill fitting game mechanics (The Assassin’s Creed series is a great example of this.) Tales does no such thing. It builds a game based on provoking human empathy and everything in the game assists that goal. This is a focused, toned masterpiece.

Tales is a spin-off/sequel to the sci-fi series, Borderlands. In the previous three games, the players are vault hunters, incredibly powerful and well armed individuals that seek to raid ancient alien treasure troves on the hostile planet Pandora. The games consist of killing a lot of things to gain loot, defeat evil, and get rich. What makes Borderlands distinctive from any other shooter power fantasies is its unique, hand-drawn like style, its humorous tone, and its emphasis on cooperation. Tales lifts the tone, setting, and style, but works them into a new context.

The story context is that the main characters are nobodies. In the main title Borderlands games, you are one of the most powerful people in the game’s universe. Corporations, gangs, governments, and alien beasts are all prey to your predator. However in Tales, the two player characters are Rhys, a low-level employee at one of Pandora’s numerous evil corporations, and Fiona, a two-bit con woman. The main characters interact with the larger than life people from the other games, but those characters never take precedent. This is smart, not only because it is a nice change of pace, but also because it gives the story the intimate stakes it needs.

The game context is the now incredibly common Telltale formula. This means that the game is mostly made up of interactive cutscenes, where players make choices and/or respond to onscreen prompts to preform predetermined actions. More traditional game sections act as breaks in the action rather than full implemented ideas. The game lurches when it no longer has control and it relishes the opportunity to take the reins. This is not to say that the interaction is worthless, just limited. For example, the choices, although mostly meaningless in terms of the narrative’s overall impact, are used wonderfully to explore the game’s central themes. A couple of the game’s numerous and universally fantastic action scenes are more impactful because of the slight interaction. Tales may not be a game for “gaming purists”, but what is there is used effectively. Despite Tales‘s video game heritage, the game’s most obvious parallel is Guardians of the Galaxy.  They are both sci-fi epics rooted in different people coming together, but the works are most similar in how they use humor to build compassion and empathy. Tales’s humor is at once unflinching and affectionate. It shows the main characters as they are, but does so in a way that builds your love for them. Most of the jokes, even when they are at a character’s expense, reveal something about them. Rarely are the jokes cheap, but they are often full. This is not to say that the humor is not ever shocking or crude(there is an extended gag involving a hacked out eyeball), but that they are jokes that color the world and its inhabitants. The jokes are layered with narrative purpose.

That purpose gives the many emotional and dramatic moments weight. The humor both assists and masks a complex, rich, and powerful thematic core. Just as Guardians of the Galaxy becomes surprisingly tender and moving, Tales becomes heart wrenching and beautiful. Even more than that, the game handles its themes with grace and maturity. The game is so good at this even clear villains and evil-doers become sympathetic and lovable. The game is so at this that, even though the moral adds up to love and friendship are good, it manages to ask complex questions: How do we live with our mistakes and the mistakes of others? How do we love, or even should we love, those who have betrayed us? How much do the people we emulate become part of us? That thematic complexity is made all the more impressive through how the game layers much of it into every aspect. The most obvious example of this are the dual protagonists. Fiona and Rhys come from wildly different backgrounds. The game reenforces their difference through the game’s changing interface. Several other characters foil each other in less obvious ways and the game constantly encourages you to make those comparisons through the player choices. Thus, the story becomes about loving or not loving, trusting or not trusting other people. Everything in the game reenforces that central theme. However, even with this focus, none of the narrative feels overbearing or contrived. It has the confidence and tact to know when to play its hand and almost never does so without purpose. In this industry, that is a real miracle.

Also like Guardians of the Galaxy, Tales has style. It has perhaps the best voice acting I have ever listened to in a game. It does not merely have a “cool” look, but it crafts images that are striking, bold, and funny. It is a rare example of comedy that feels cinematic. For example, the game is split into five parts and each part opens with a title sequence set to a song. These segments are funny, inspiring, thrilling, even chill inducing and they put popular music to fantastic use. Here’s an example(minor spoilers):

All in all, the game is a blast. It is confident enough to instantly make you feel at home. Every story beat, whether surprising or not, feels earned. Everything from jokes, to aesthetic, to music, to plot moves a holistic and smart experience forward. Tales from the Borderlands made me laugh. It made me cry. It made me care. It is a game that I already want to relive. You are lucky, because you will get to play it for the first time. You will not regret it.

One thought on “Review: Tales from the Borderlands”