The relationship between player and game is defined by an implied contractual obligation. When players begin to play a game, they enter a pact and agree to abide by certain rules until the experience is over. Of course, these rules can easily be broken, but the players, usually, choose not to do so. This invisible contract is similar to the ones we all participate in as members of any society. As citizens of a nation, we implicitly agree to rules or laws. Valve’s Portal explores the societal constrictions and values we are confronted with in the context of a game. It sets up rules and scenarios, intentionally inflicted upon the player, and then explores what happens when we resist them. Portal proposes that we can break free from the cultural constraints that bind us, but that those restrictions define us beyond our ability to escape them.

In Portal, the player is a test subject for a series of experiments exploring the capabilities of a Portal gun. This gun creates two portals that are linked to each other. If the player places a portal on one wall and another on an opposite wall, he can move from wall to wall through the portals. The player is guided by a computer voice, known as GLaDOS. As the player progresses from experiment to experiment, it becomes increasingly clear that GLaDOS may be doing more threatening things than she is letting on. When the final test ends with her attempt to kill you, the player escapes and finds her way through the complex to confront GLaDOS herself. Through the gentle escalation of gameplay concepts and the personification of the teaching methods, Portal helps the player learn the vernacular of the game. Thus, it gives the player both a gameplay language and a culture to defy. In the developer commentary included in the game, Robin Walker says, “Portal is effectively an extended player training exercise.” It wants the player to succeed within the rules of the game. For example, one developer Kim Swift noticed that players “grasped the concept [of portals] much more quickly when they got a glimpse of themselves through a portal. So we deliberately placed this first portal so that all players will invariably see themselves.” If we personify the developer in the computer antagonist, GLaDOS, the game wants you to understand how it works. The very way the environments are constructed help the player succeed at the basic goals. This sets up the practical rules of the virtual culture you enter by playing Portal and in a very distinct and important way condition the player to the experience.
The characterization of GLaDOS creates the rest of that culture. The teacher is often abstracted in video games -the role is often delegated to text boxes or throwaway characters- but in Portal it is personified. GLaDOS constantly quips and gives you advice, both within the context of the test chambers and outside of it. For example, in one level the player is given a “companion cube”, a large metal cube that is used to solve puzzles. At the end of the level, the player is asked to destroy the cube. If the player hesitates, GLaDOS says, “Rest assured that an independent panel of ethicists has absolved the Enrichment Center, Aperture Science employees, and all test subjects of any moral responsibility for the Companion Cube euthanizing process.” This places you and the game’s systems within a wider culture. It implies that you are being influenced by the potential of wider actions outside of the context of the game. Even as the game breaks you free from the arbitrary constraints of the test chambers, the player still relies on the techniques that those you defy have taught you the whole game. After you escape the last test chamber, the gameplay does become less overtly gamelike. The giant glowing boards showing the level number cease to appear. The separations between puzzles become slightly less strict and you are funneled between the puzzles in broken tubes or hidden passageways, not elevators. However, many of the differences are superficial and you use the techniques that the test chamber so meticulously taught you to progress. For example, as soon as you escape you must gain momentum through the continuous use of portals to keep forward motion. This is a concept that the game spent an entire level teaching you. You also search for “exit” signs that go the way forward. Although the player character is theoretically rejecting the culture that GlaDOS and Aperture Science presented, she is using what both those things taught her in order to rebel. 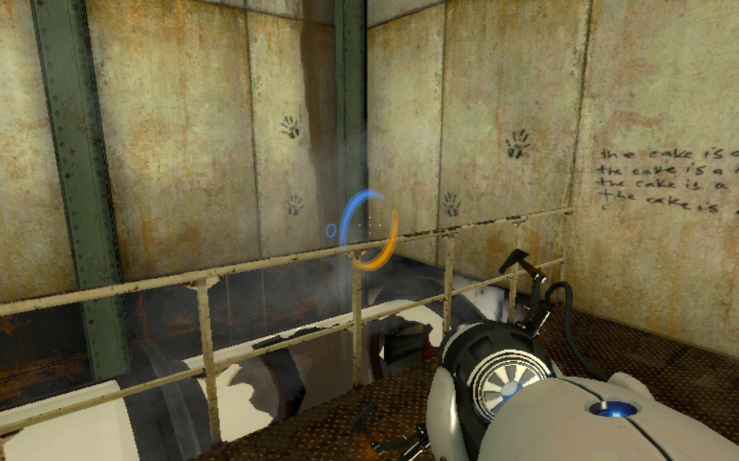 There is one very important way the game gives you freedom: psychologically. It gives you all the narrative pieces and asks the player to arrange them. It is especially significant in this regard that Chell, the name given to the protagonist outside of the game, is silent. If she had talked, the game would be informing your emotions. If Chell wept as she discarded the companion cube or disposed of it without emotion, it would tell the player what the proper response would be. If there is total freedom to be found in the experience of Portal it is in thought. Portal knows that games are not created or consumed in a vacuum, so the game leaves you to decide how you will let the “conditioning” created by the game affect you. Ultimately, as freedom is reached and the boundaries of the game break down, the players can do nothing. The real world is more of a concept or a distant goal than any kind of reality. It is tantalizing and desirable in the context of the game, but the game makes no explicit attempt to explore the consequences of the player’s sudden freedom. Rather, it lets the players themselves decide, but even those thoughts, free as they are, are essentially reactions to the experience at hand. Portal frames the game, through GLaDOS’ dialogue, as an experience outside of a ruleset. By doing so, it makes the claim that the rules and culture you experienced will continue to affect you. The final song in the closing credits illustrates this point. GlaDOS is “still alive” and still actively a part of your memories and experiences. The song even plays throughout the game, in a modified version, on the radios found in each level. The game creates a throughline that implies the permanence of conditioning and experience. Portal is a meditation on video games that uses video game conventions and ideas to express wider implications about the nature of experience as a permanent part of how we continue to exist. It proposes that the way rules are framed and the way we process experience affects us continually even if we fundamentally reject what those rules represent. Chell’s skills with the portal gun and the knowledge she gained in the labs will affect her forever, just as the way we process her experience affects us.