A History of Violence is a series examining games that handle violence in a powerful, unusual or mature way.

All hyperlinks lead to referenced cutscenes.

In most video games, violence is a means to an end. It is a way that the player and/or the player character can enact their worldview on the game-space. Violence solves problems, many video games conclude, and certain kinds of it are always justified. Rockstar’s Red Dead Redemption, however, depicts violence as futile. It is a force and an addiction that drives the game world, but nevertheless it only leads to nothingness. Red Dead Redemption uses the player character, the game world and the player’s actions to bleakly depict futile, cyclical violence.

For those unfamiliar, Red Dead Redemption is a western game. It concerns John Marston: a former outlaw who attempts to start a new life with his family. However, his past catches up to him. His family is kidnapped by government agents who will only return them to Marston’s care if he hunts down his former compatriots.

The game proper is typical of other open world games. The player can explore New Austin – a fictional county in Texas – populated with side missions, optional activities, and main missions that directly advance the plot of the game. Superficially, the game is a power fantasy that feeds into the images and tropes we all know from Westerns in film or literature. For example, the main hook of the otherwise very typical shooting mechanics is “deadeye.” John Marston can slow down time to allow pinpoint accuracy. The assembled side activities, like poker, night watches, etc. also solidify Western fantasies and tropes. What separates Red Dead from any other video game power fantasy is the relationship that John Marston, the game world and the player have with violence.

The violence in Red Dead is justified. It is not necessarily justified in a moral sense, but in a contextual sense. John Marston kills for reasons that are narratively sensible. In Cameron Kunzelman’s excellent brief essay about Red Dead Redemption, he makes the following observation: “I appreciate RDR because it doesn’t dodge the question of why the main character is doing horrible things like killing fifty citizens and then razing their town… It is because the most important thing in his life is the people he cares about and he is both capable of and willing to do anything, anything, in order to make sure that those people are safe.” His family could be killed and would be imprisoned if he did not complete his mission. He loves his family enough to justify a great many things.

This willingness to justify violence is further contextualized by Marston’s attitude. In an early story mission, Marston is shot and wounded. A rancher rescues him. To pay her back, Marston assists her in protecting the ranch from rabbits and wolves. After Bonnie, the rancher, gives him a gun she says, “I feel a lot happier someone’s along with me.” Marston replies, “I feel a lot happier now I got a rifle.” This line depicts Marston defining himself, his power to change his circumstances, and his safety on his ability to commit violent acts. The violence that Marston has committed and will commit define him in a way that moves beyond most video game protagonists. His past haunts him, but his specter is not only regret, but also pleasure. The shooting is fun for the player because it is fun for Marston. He is sick of poverty, misery, treachery and death, but he is surely not sick of fighting. 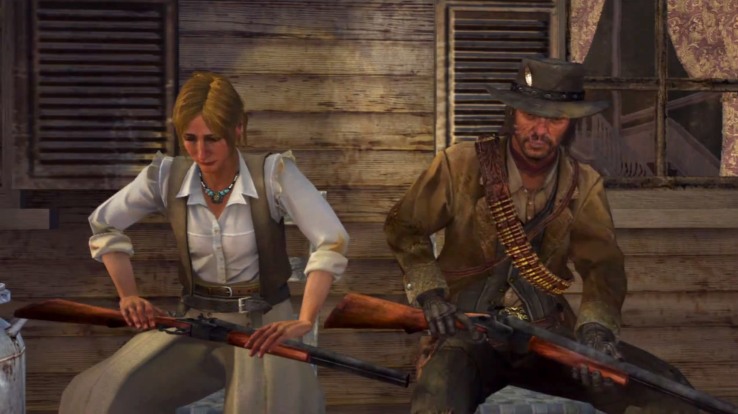 It is in this context that the player is allowed to make their own decisions about who Marston is. As Marston, the player can murder, plunder, steal, and vanquish. They can also help and rescue. Marston’s temptations are the player’s temptations. Because they are placed within the same narrative framework, Marston acts as both a conscience and a catalyst for the player’s actions.

While Marston and the player provide emotional and practical context for the game’s violence, the world responds to that violence with futility. The game takes place in 1911 at the sunset of the wild west. The world is not dead, but it is constantly dying. The world remains in this surreal limbo. Things never change. No matter how many bounties you carry in, there will always be more to complete; the game generates new targets. An algorithm spawns random events for the player to encounter. This leads to a world that is in the constant threat of random violence. No matter how much good one does or how many crimes are prevented, New Austin will forever be a wasteland. The player’s interaction with the game emphasizes that futility. No matter how much effort the player expends, for either good or ill, little will change for New Austin or for Marston.

This cycle of violence is reenforced narratively. At the end of the game, Marston succeeds in killing his previous comrades and his family and ranch are returned to him. The last few missions introduce a change of pace. Marston teaches his son how to hunt and runs the ranch with his uncle. However, in the game’s final mission, Marston’s house is assaulted by the very agents who hired him. To protect his family he sacrifices himself to ensure their survival. Although Marston has done a great deal to redeem himself from his crimes, they still come back to destroy him.

Marston’s death is thematically significant, because he is unable to remove himself from his past violent acts. Although the player can decide what his exact intentions and actions are, his violence will come back to kill him no matter what kind of man Marston ultimately was. The world of Red Dead is unforgiving, but this sense of “justice” is also futile. After Marston’s death, the player assumes control of Marston’s son: Jack. The game then introduces a brief mission in which Jack enacts revenge on the agent who killed his father. After he does the title plays again and the credits roll. This moment links Jack’s actions to wider theme of how violence provokes more violence. The agent who killed Marston thought to “tame” the wild frontier, but he only ended up inspiring more violence. Even after the jump of years and the shift in character, nothing in New Austin has changed. The “Red Dead Redemption” starts again. There is a new John Marston; one who was equally wronged by the system that surrounded him, who also seeks to make his past right. He lives the same life as his father did.

What makes this effective is your empathy with John Marston. You understand why he wants to return home. You understand, on a personal level, why he does the things he does. You want him to break free from the life that he once lead. However, he cannot have it. He dies in defense of it. Thus when his son, whom John wanted to be a rancher, becomes a criminal and enacts his revenge it is tragic rather than satisfying.

There is nothing created by its violence in RDR. There is only destruction to be found. The game offers no resolution to whether a man can really change or make a difference with his actions. Rather it forces us to stare down the abyss of hatred and pain caused by violence.

Kunzelman’s Red Dead Redemption piece. Read his other stuff too, because it is fantastic.